Get your Caffeine right for next level cognitive benefits.

Home / Get your Caffeine right for next level cognitive benefits.

Coffee is a dark-colored, bitter, somewhat acidic beverage that has a stimulating effect on humans, owing to the caffeine content. Espresso, French press, café latte, or already-brewed canned coffee are just some of the ways it may be made and served across the world. But did you ever wonder where the popular drink came from?

Around 850 years ago, Kaldi, a goatherd, discovered the coffee plant. At his wife's request, he took the berries to some Monks in a monastery.He explained it to them and stated that the effects are unlike anything they've ever experienced.

After trying one, he'd never felt so delighted in both his mind and body.Hearing this, the monk burned them because he thought it was the devil's work. The fragrance of fresh coffee permeated the chamber in a matter of seconds

Then they swept the coffee beans off the fire, smashed them, and poured boiling water over them. The MONKS stayed up all night to drink this new refreshing “cocktail”, promising to do so in the future in order to keep their nocturnal devotion.

THE REST IS HISTORY! 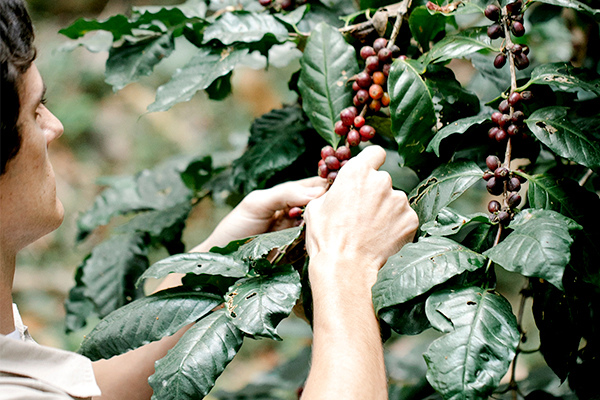 ❝The monks swepts the coffee beans off the fire, smashed them, and poured boiling water over them. They stayed up all night to drink this new refreshing “cocktail”, promising to do so in the future in order to keep their nocturnal devotion.❞

CAFFEINE: HOW DOES IT WORK?

Caffeine has a structure that is similar to adenosine , a brain chemical that makes you feel tired. It binds to adenosine receptors in the brain and blocks them. Caffeine molecules bind to those receptors and prevent it from happening, providing a temporary boost of energy and alertness.

Simply put, When the adenosine receptors are inhibited, some of the brain's natural stimulants (such as dopamine) function better. The excess adenosine floating around in the brain signals the adrenal glands to secrete Adrenaline. 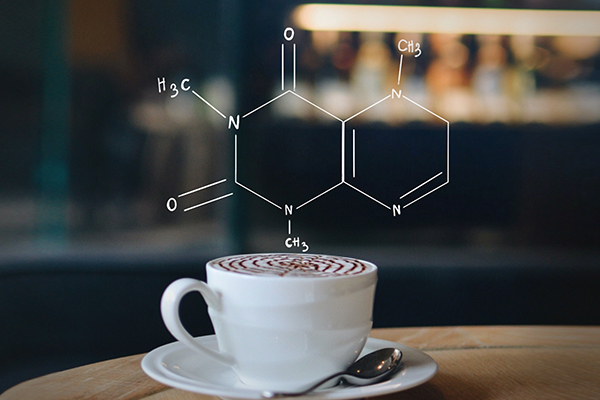 ❝Caffeine works by mimicking adenosine receptors. Caffeine, which binds to the same receptors as adenosine, provides a temporary boost of energy , alertness and gives you the Buzz!❞ 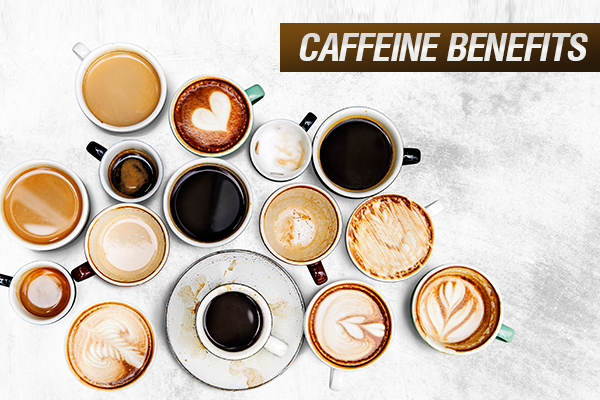 Whether you're taking a mug of coffee at work, or enjoying a pre-workout espresso shot, It's difficult to imagine a day without it. Caffeine gives you a boost of energy, and there's something soothing about that sip. But is it good for your health? Wait for it... YES IT IS! No it won't darken your skin tone. It's more powerful than ever! According to studies, it may provide you with more benefits than you ever imagined.

Imagine you wake up early in the morning and go for a walk. While strolling around you find one of the famous coffee shops in your area. You get a craving for caffeine and buy a cup of coffee. Now get this: the coffee which you're sipping might not be a healthy option.

Most of the popular brands on the market have a tendency to make coffee from a healthy option into an unhealthy one, with loads of added sugar, flavors and syrups. You might as well be drinking a sugar loaded ice cream shake! So this is a little nudge from us to you to wakeup and become a little more discerning when it comes to your coffee. 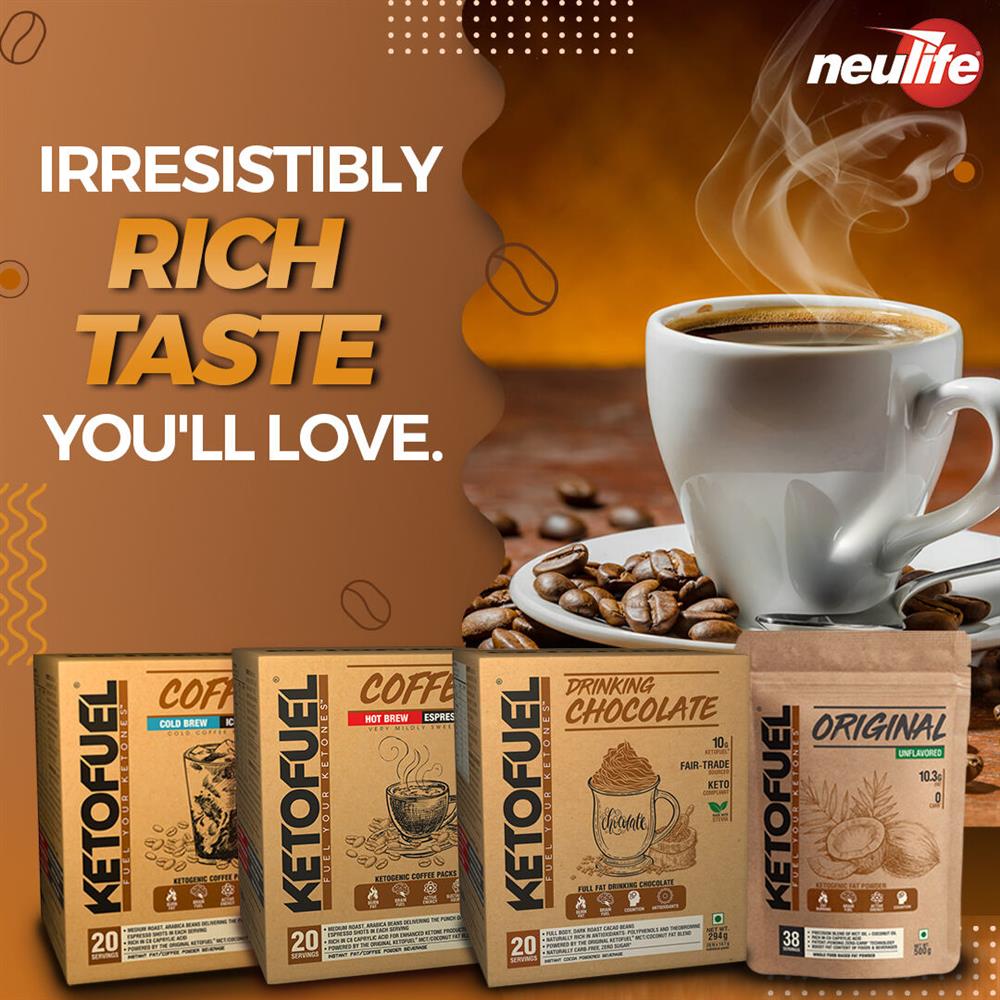 Coffee & MCT's: How the body uses fat for fuel

We've been brainwashed to think that fat is bad and that it causes weight gain or even heart attack. Well, that's not true! A diet that is designed to fuel exercise must include fat. Fat is our main source of energy because of its high calorie density and seemingly limitless storage capacity. Ketones derived from fat are shown to be more efficient energy suppliers than glucose. One gram of dietary fat equals nine calories of energy. Long-duration, low- to high-intensity exercises such as marathons, triathlons, and weight training use fat as the primary fuel source. As a result, our Ketofuel is high in fat derived from MCTs and coconuts.

❝Fat is our main source of energy because of its high calorie density and seemingly limitless storage capacity. Ketones derived from fat are shown to be more efficient energy suppliers than glucose. As a result, our Ketofuel is high in fat derived from MCTs and coconuts.❞

ALL INSTANT coffees on the market are over 70% carbs! Each cup can give you anywhere from 5-15g of carbs depending on how strong you make it. At Neulife we love our coffee and wanted to solve this dilemma. Enter KETO FUEL®, a Ready-to-mix, Full-Fat Keto-Coffee pack, custom designed for Hot & Cold Brews with added stevia. Because some addictions are worth having.

How about taking a pack of KETOFUEL® instead, be it for an early morning walk, at work or even while traveling. So you can not only satisfy your coffee cravings but actually boost immunity and energy at the same time!

Wake yourself up with a cup of coffee, and remember to be healthy and powerful. When thinking is sharp, workouts become more productive and effective. Endurance athletes appear to benefit greatly from coffee. No need to rush to an expensive coffee store or take any caffeine pills or expensive pre-workouts with loads of sugar! Fire up the coffee pot and enjoy a warm cup of coffee or an espresso shot before your workout instead.

Just leave out the cream and sugar!